A 30‐year‐old man visiting from Russia presented to our public hospital with two days of a progressive, descending erythematous rash. He also complained of four days of fevers to 40°C, myalgias, conjunctivitis, and a non‐productive cough. Two days prior to admission, the traveler first noted erythematous papules along his beard‐line, subsequently spreading across his face and descending down his trunk, arms, hands, and legs. He denied any prior health problems, medication or supplement use, and any illicit drug, tobacco, or significant alcohol use. He was in a monogamous heterosexual relationship. Originally from Ukraine, he was unaware of his childhood vaccination status. Five days before presentation, the patient had traveled from Moscow through Chicago to San Francisco for a technology conference. On exam, he was febrile and tachycardic with normal room air oxygenation. His skin was notable for a confluent, erythematous, maculopapular rash covering his whole face, which lessened over his trunk, arms, and palms. There was scleral injection, but no oropharyngeal or mucous membrane involvement. He had no meningismus or neurologic deficits. Laboratories revealed a normal white blood cell count with neutrophil predominance and mild thrombocytopenia. HIV antibody and RPR returned negative. Chest radiograph demonstrated peribronchial cuffing and bilateral interstitial opacities. He was admitted on respiratory isolation for supportive care and evaluation of his suspected viral exanthem. On hospital day two, the patient’s nasopharyngeal PCR returned positive for Rubeola, Rubeola IgM returned positive, and IgG was quantitatively undetectable.

Despite eradication of endemic Rubeola (measles) transmission in the United States, a median of 60 cases per year were reported from 2001‐2012. This year, there have been 159 reported cases in the US—23 in returning citizens and 19 in visitors. Measles is a highly contagious viral illness with a 6‐19 day incubation period, followed by a classic prodrome of cough, coryza, and conjunctivitis. The characteristic morbililform rash then spreads cephalocaudally and centrifugally, as in our case. Though debated, the height of contagion is thought to be during the late prodrome phase. Complications include upper and lower airway tract disease, ocular keratitis, pericarditis, and encephalomyelitis. Diagnosis is made through antibody testing or culture/PCR of secretions. Following the rash, a period of recovery and lifelong immunity typically develop. Increasing resistance to measles vaccination in the US has the potential to precipitate large outbreaks. Hospital providers should ensure that patients with suspected measles are placed in high respiratory isolation to mitigate disease spread among unvaccinated patients or providers, pregnant women, or immunocompromised hosts. Hospital infection control officers and local health authorities should be notified of suspected or confirmed cases.

Amid recent opposition to recommended vaccinations, a growing number of cases in the United States, and a persistent viral burden abroad, hospitalists must be familiar with the clinical presentation and characteristic exanthem of measles in adults. Given the public health risk, admitted patients with suspected measles should be placed in high respiratory isolation with infection control officers and local health authorities involved to ensure prompt investigation of exposures 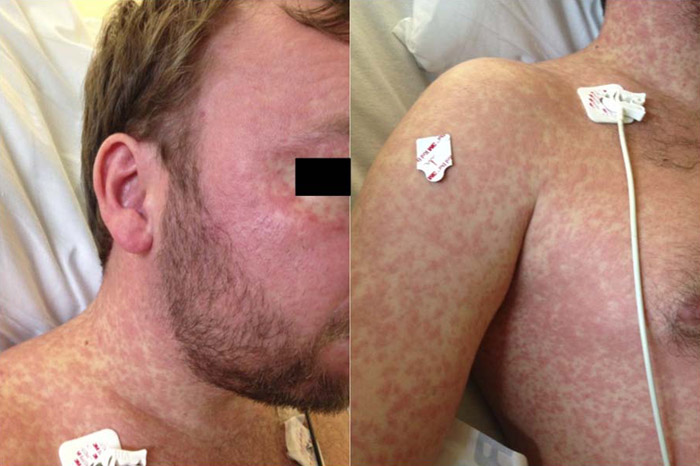