A 79 year‐old man presented with a fracture of his left leg after a mechanical fall from an upright position. He was treated for a tibial plateau fracture with a non‐weight bearing splint. Upon further questioning, he reported a history of polyarthralgias since childhood and deformity and pain of his hands. On exam, his lingual frenulum was absent. He had no cardiac murmur. All of his joints were hypermobile. He had multiple subluxations of his metacarpophalangeal joints and proximal interphalangeal joints that were completely reducible. His skin was hyperelastic, velvety, and very thin. Antinuclear antibody, rheumatoid factor, and anti‐citrullinated protein antibody serologies were negative. Hand x‐ray revealed multiple subluxations and prior surgery. Upon further review, the patient revealed that both his brother and father had similar joint and skin manifestations.

Polyarticular joint pain is a complaint that hospitalists should feel comfortable approaching. As it encompasses a broad differential, it is important to have a method so that even the rarest diseases can be diagnosed. There are six clinical factors that can help narrow the differential: chronology, distribution, inflammation, extra‐articular manifestations, disease course, and patient demographics. The differential includes viral infection, bacterial infection, crystal‐induced synovitis, systemic rheumatic disease, systemic vasculitis disease, spondyloarthropathies, endocrine disorders, malignancy, osteoarthritis, and hypermobility syndromes.

In this case, the patient had chronic polyarticular joint pain involving greater than ten joints with symmetrical distribution. He had no signs of inflammation. Extra‐articular manifestations included skin hyperelasticity, skin thinning, and absence of lingual frenula. His disease course included early onset with a progressive nature. Rheumatoid arthritis was unlikely due to lack of inflammation and early age of onset. Juvenile idiopathic arthritis was unlikely due to ability to completely reduce the joints.

Ehlers‐Danlos Syndrome includes a variety of inherited conditions characterized by varying degrees of joint hypermobility, skin hyperelasticity, and easy bruising. Lack of lingual and labial frenulae are considered a minor feature of this disease. Most cases are autosomal dominant as believed to be in this patient. Joint pain is very common, especially early onset osteoarthritis. As seen in this patient, subluxations can occur, but are easily reduced and may eventually require surgery. 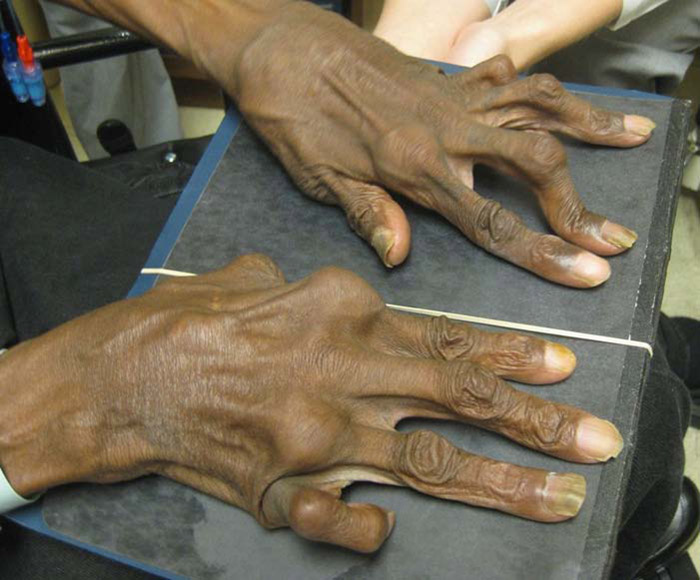