We report a case of Allopurinol induced drug reaction with eosinophilia and systemic symptoms (DRESS) syndrome. A 54‐year‐old male presented with toe pain due to gout. He was started on allopurinol. Two weeks later, he had severe pruritic rash. Initially, rash was noted on the abdomen and later it spread to his face and feet. On exam, he had fever of 102 and tachycardia. He had diffuse maculo‐papular rash involving more than 90% of his skin including palms and soles. He also had oral ulcers, facial swelling and lower extremity edema. Labs showed WBC count 5K, Hemoglobin 12, platelets 104K, eosinophils 14%, Creatinine 3.2, AST 92 and ALT 82. CT chest showed reactive appearing lymph nodes in both axillae. Skin biopsy showed acute vacuolar interface dermatitis. The patient was initially diagnosed with sepsis due to fever, rash and lymphadenopathy and was started on antibiotics. Subsequent Infectious work up including pancultures, Herpes simplex and Human Herpes virus serology was negative. His rash did not improve with antibiotics. Based on type of rash, edema, lymphadenopathy and eosinophilia, a diagnosis of DRESS syndrome was made and pt was started on systemic and topical steroids. His facial edema and erythema improved slowly over several days. He was discharged on gradual steroid taper.

Differential diagnosis includes sepsis, SJS/TEN and acute generalized exanthematous pustulosis (AGEP). SJS/TEN patients develop blisters, desquamation and severe mucosal involvement 4‐28 days after starting the drug and they typically do not have eosinophilia and their skin biopsy shows necrosis. Another differential is AGEP, which starts within 48‐72 hours of starting drug and these patients usually have pustular skin lesions.

A high index of suspicion is necessary to identify DRESS syndrome in patients who present with rash, fever, edema, lymphadenopathy, systemic involvement and eosinophilia in the setting of exposure to Allopurinol 2‐4 weeks prior to onset of symptoms 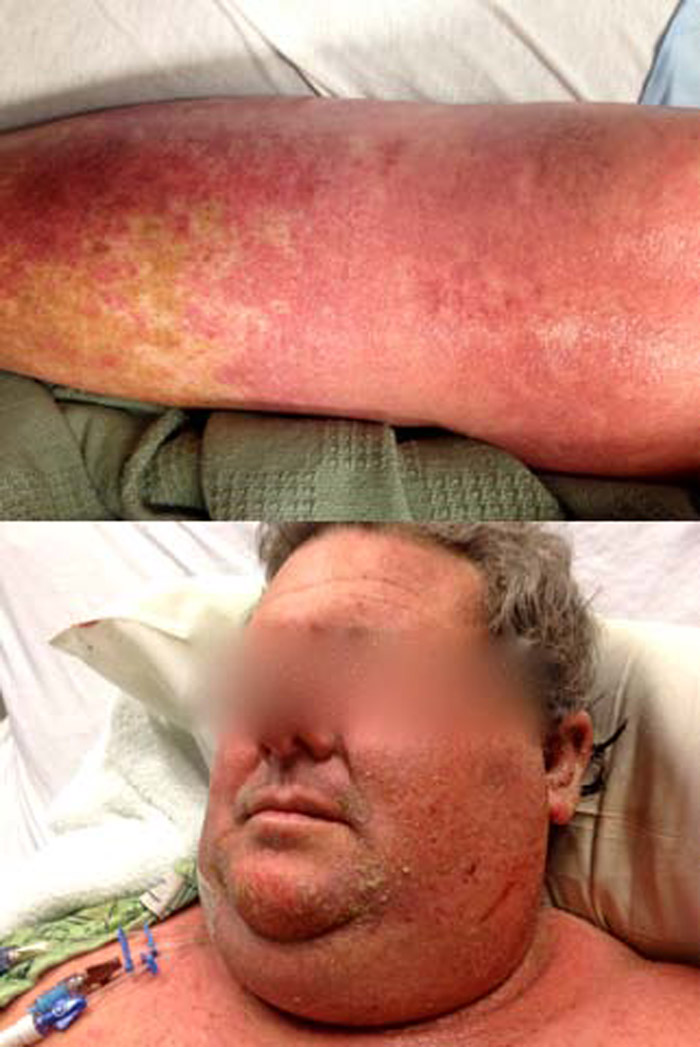