A 36‐year‐old man presented with 6 weeks of abdominal pain, bloody stools, and fatigue. Pain was described as dull, 6 of 10 in intensity, nonradiating, in bilateral upper quadrants and epigastrium, lasting minutes to hours, worsening with food and lying on the right side. There were multiple episodes of bright red stools throughout the course. He denied fevers, chills, hematemesis, night sweats, joint pains, or rashes. Associated symptoms include nausea and vomiting, a 25‐pound weight loss in 3 months, fatigue, lightheadedness, and dyspnea on exertion. He denied use of prescription or over‐the‐counter medications. He had a travel history of overseas military service in Iraq. There was no evidence of mucosal ulcers or anicteric sclera. There was significant tenderness in the right upper quadrant, with the liver edge 6 cm below the costal margin. There was no significant abdominal distention, ascites, or veins; no gynecomastia or testicular atrophy; and no peripheral edema, rash, or spider angiomata. Remaining exam was normal. There was a white blood cell count of 15,000 cells/mm3, hemoglobin of 10 g/dL, platelets of 178,000, total bilirubin of 1.9 mg/dL, AST of 82 U/L, ALT of 94 U/L, and alkaline phosphatase of 257 U/L. Hepatitis panel was negative. Remaining laboratory data were normal. CT abdomen imaging revealed cholelithiasis, an inho‐mogeneous enhancement of the liver, and no colitis. Telangiectasias were noted in the stomach during an endoscopy, and a splenic flexure mass seen on colonoscopy. No evidence of restrictive cardiomyopathy seen on transthoracic echocardiogram. Renal function was preserved. Bence–Jones protein (kappa) 31 mg/24 hours was seen on urine protein electrophoresis. Biopsies of the stomach, duodenum, liver, and small and large intestine showed amyloidosis. A colon mass was diagnosed to be a blood clot. 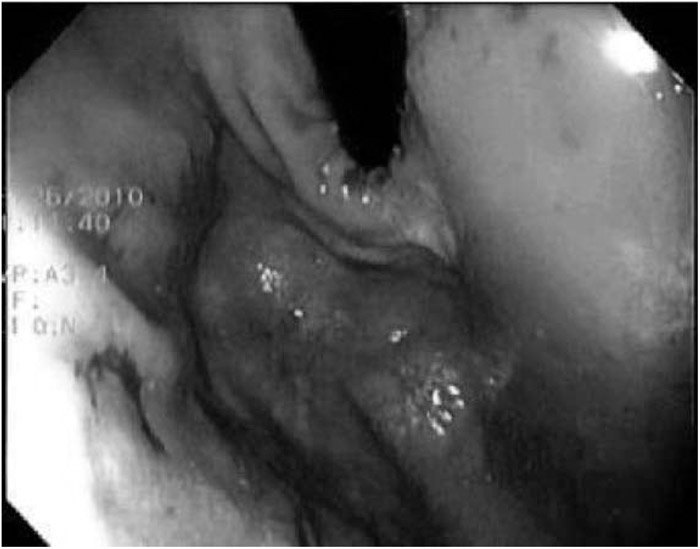 FIGURE . Submucosal hematomas noted near the fundus of the stomach.

Gastrointestinal (GI) blood loss is a common problem encountered by the hospitalist. Amyloid proteins (of any type) can deposit in various parts of the gastrointestinal tract and liver, resulting in symptoms of gastrointestinal bleeding, dysmotility, diarrhea from bacterial overgrowth, hepatomegaly, malabsorption, and protein‐losing gastroenteropathy, primarily from mucosal or neuromuscular infiltration. Diagnosis is by tissue biopsy of the GI tract. Cause of death is most often a result of renal failure, restrictive car‐diomyopathy, or ischemic heart disease. Goals of treatment would include symptomatic control of the GI manifestations and of the underlying cause of the amyloidosis.

Physicians should recognize GI amyloidosis as a cause of GI blood loss and screen for plasma cell dyscrasias; more so when submucosal hematomas are seen on endoscopy.