A 62‐year‐old woman with a history of stage IIB squamous cell carcinoma of the cervix was treated with total abdominal hysterectomy–bilateral salpingo‐oophorectomy and chemoradiotherapy in 2003. In September 2011 the patient presented to our hospital with mild abdominal pain, jaundice, and weight loss of 3 months' duration. Laboratory results were significant for total bilirubin 15.9 mg/dL, direct bilirubin 11.6 mg/dL, AST 195 IU/L, ALT 216 IU/L, and alkaline phosphatase 672 IU/L CT abdomen showed a pancreatic head mass causing obstructive dilatation of the CBD, a right renal mass, and a left adrenal mass. An ERCP revealed a 2.5‐cm stricture in the mid‐CBD and a markedly dilated gallbladder. A plastic biliary stent was successfully placed to relieve the obstruction. An endoscopic ultrasound showed enlarged peripancreatic and porta hepatis lymph nodes without any mass of the pancreatic head. FNA biopsies of the lymph nodes at the porta hepatis were positive for malignant cells consistent with poorly differentiated carcinoma. Because the patient had a history of cervical cancer, an immunohistochemical stain for p16 was obtained, which was positive, suggesting cervical cancer as the primary. Subsequently, results of an US‐guided core biopsy of the right kidney mass confirmed squamous cell carcinoma of cervical origin. The patient's hospital course was complicated by septic shock due to E. coli bacteremia, and she died 2 weeks later.

: Obstructive jaundice is caused by an interruption to the drainage of bile in the biliary system. Gallstones in the common bile duct and pancreatic cancer in the head of the pancreas are the most common causes in the United States. Obstructive jaundice can also happen as a result of malignant metastases to the pancreaticobiliary system. The most common metastatic tumors causing obstructive jaundice are stomach, colon, breast, kidney, and lung. Many of these patients are initially misdiagnosed with primary cholangiocarcinoma or pancreatic carcinoma as the cause of jaundice. The diagnosis of metastatic tumor should be considered in all patients with obstructive jaundice, especially if a previous malignant lesion has been identified. Obstructive jaundice due to recurrent squamous cell carcinoma of the cervix (SCCC) is exceedingly rare and carries a grim prognosis. There are only 6 similar cases previously documented in the literature, most of whom died within the first year of presentation. 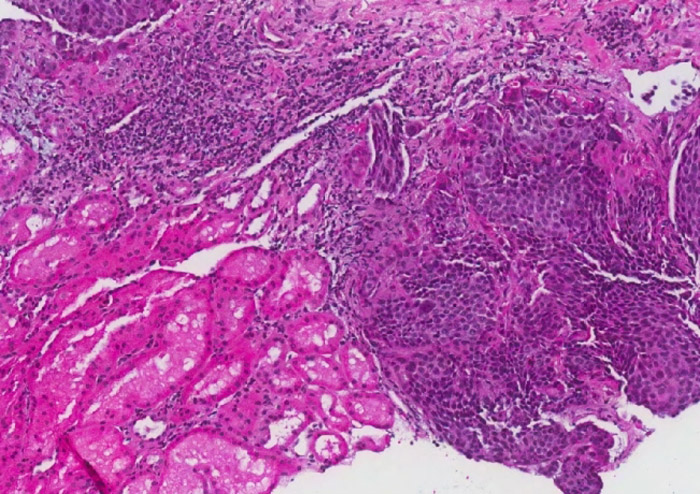 A core biopsy of the kidney mass shows squamous cell carcinoma of the cervix.