An 8‐day‐old girl born full term, normal spontaneous vaginal delivery, with transient tachypnea of the newborn requiring a 5‐day stay in the neonatal intensive care unit, presented to her private medical doctor for decreased feeding and was noted to have thrush and generalized tonic–clonic seizures, so she was sent to the emergency department, where she had 2 more seizures. She had no history of fever, vomiting, or diarrhea. A review of systems workup was done because of the seizures, and treatment with ampicillin, cefotaxime, and acyclovir was started. Labs were only significant for hypocalcemia of 4.4 (normal, 8.5–10.5), iCal of 2.28 (normal, 4.5–5.3), and Mg of 1.4 (normal, 1.7–2.7). Her electrocardiogram showed a prolonged QTc of 500 ms. She received Ativan for continued seizure activity and a calcium gluconate bolus and was admitted to the pediatric intensive care unit for further management. Multiple boluses of Ca and Mg were done via PIV with improvement of iCal to 4 and QTc decreased to 400 ms, but she continued to have seizures. A chest x‐ray to evaluate the thymus for DiGeorge syndrome showed universal sclerosis of the skeletal structures compatible with a diagnosis of osteopetrosis. She required continuous intravenous (IV) calcium gluconate via a central line and IV magnesium until both values normalized and was started on high‐dose calcitriol and ergocalciferol to try to stimulate osteoclast formation and bone resorption. She received a bone marrow transplant at 3 months and is currently engrafted and doing well.

Hypocalcemia can occur in newborns and manifest as seizures. Calcium replacement is critical with attention to magnesium and phosphate. Calcium is best given by a central line. Osteopetrosis is a rare cause of neonatal hypocalcemia. It is a heterogeneous group of heritable conditions in which there is a defect in bone resorption by osteoclasts that leads to increased skeletal mass and sclerosis because of abnormally dense bone. The incidence of autosomal recessive osteopetrosis is 1 in 300,000 births. Some specific gene defects are known, but many patients have no identifiable gene defect. Clinical presentation of patients with osteopetrosis is usually pathological fractures, failure to thrive with frequent upper respiratory infections (chest x‐ray often suggests diagnosis), anemia, granulocytopenia, and thrombo‐cytopenia. Hypocalcemia with seizures is a rare presentation. Physical exam may be significant for hepatosplenomegaly. Lab work can show hypocalcemia, normal PTH, anemia, granulocytopenia, and thrombocytopenia. The diagnosis is usually made with plain x‐ray that shows very dense bones without corticomedullary demarcation, broadened metaphysis, and a “bone‐within‐a‐bone” appearance. Diagnosis is confirmed with iliac crest bone biopsy. In severe forms, the insufficient bone marrow cavity cannot support adequate hematopoiesis, leading to frequent and severe infections. Narrowing and sclerosis of the optic and auditory nerves can lead to blindness and deafness. Patients may develop hydrocephalus, seizures, and retardation. Multiple fractures can occur. Death usually occurs because of severe infection. For treatment of malignant osteopetrosis, bone marrow transplant was first done successfully in mice in 1993 and subsequently has been used for successful treatment in humans. 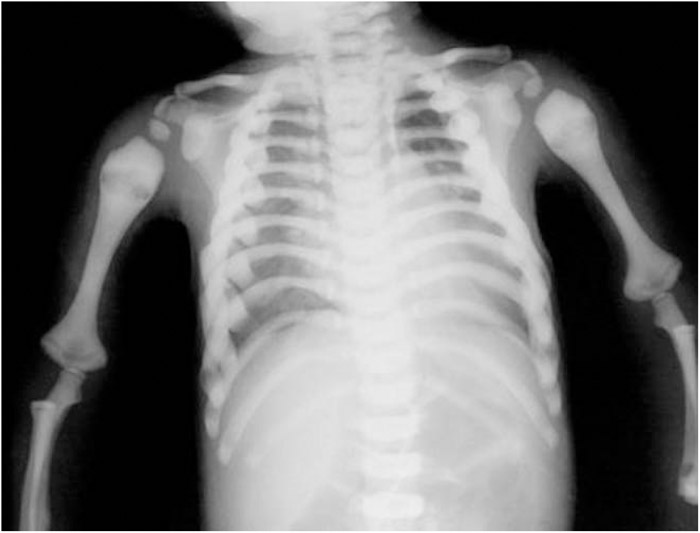 Neonatal seizures can be caused by hypocalcemia, a rare presentation of osteopetrosis, a rare disease, now potentially curable by bone marrow transplant.