We present a case of a 4-month-old male with fever, anemia, thrombocytopenia, and elevated liver enzymes.  The patient had been well up to 2 weeks prior to admission when he became febrile.  He had daily fevers for 2 weeks.  He was initially diagnosed with bilateral otitis media.  However, after supportive care and antibiotics, his daily fevers persisted, therefore he was admitted for further care.

The patient’s exam on admission was normal except for significant hepatomegaly and splenomegaly.  A CBC showed a hemoglobin of 7.4 g/dL, a WBC count of 6.1×103/uL, an ANC of 1.59×103/uL and a platelet count of 102×103/uL.  Due to the concern of possible malignancy and fever of unknown source, Hematology and Oncology and Infectious Diseases were consulted.  He underwent a bone marrow aspiration and lumbar puncture along with a full fever of unknown source workup.  The aspirate looked to have erythroid hyperplasia and high number of megakaryocytes but did not show any blasts or leukemic cells.  However, he had granulomas on the bone marrow biopsy, which given his clinical condition was highly suspicious of disseminated histoplasmosis.  He was started on liposomal amphotericin B. Serum Histoplasma testing was positive at 9.68 ng/ml, and his bone marrow fungal culture was positive for Histoplasma.

After starting patient on the amphotericin he clinically improved.   He had a central line placed and was continued on IV amphotericin as an outpatient   He is doing well and awaiting follow up testing to determine if antibiotics can be stopped.

Histoplasma is present throughout the world, but it is most common in the North and Central America.5 In the United States, Histoplasma mainly lives in the soil of the central and eastern states, particularly around the Ohio and Mississippi river Valleys[Figure1].5  Disseminated Histoplasma usually occurs when an previously uninfected individual inhales a large inoculum of Histoplasma, after which the Histoplasma can overwhelm the host immunity.1  Infants, elderly, and immunocompromised patients, are the most susceptible to disseminated Histoplasma.  As our patient resides in the Ohio River Valley, we postulate this is the reason he acquired Histoplasmosis.

Disseminated disease is characterized persistent fevers, weight loss, hepatomegaly as well as hematologic abnormalities, including anemia, leukopenia, and/or thrombocytopenia.  Other symptoms may include splenomegaly, diffuse lymphadenopathy, and pulmonary symptoms.4  With early treatment, most patients will have a cure rate > 85%.1 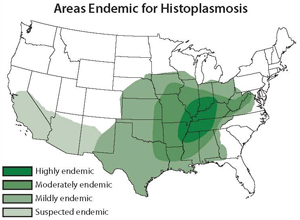