Episodes of patient deterioration on hospital units are expected to increasingly contribute to morbidity and healthcare costs. This randomized, controlled study was designed to evaluate whether an automated clinical deterioration alert sent to the nurse member of an acute care team (ACT) could affect the rate of ICU transfer, hospital mortality, and hospital length of stay.

The study was conducted on eight adult inpatient medicine units of Barnes‐Jewish Hospital (BJH), a 1250‐bed academic medical center in St. Louis, MO. An automated early warning system (EWS) previously described and developed at BJH was used to identify patients as “at risk” for clinical deterioration. The “at risk” patients were assigned by a computerized random number generator to either the intervention group or the control group over a four month period, 24 hours per day, 7 days per week. The intervention group had the alert sent in real‐time to the nursing member of the hospital’s ACT, who performed a bedside assessment using the Modified Early Warning Score to make further clinical decisions and recommendations. The control group also generated an EWS alert, but the alert was hidden from clinical staff.

Real‐time alerts sent to the ACT nurse were associated with a reduced hospital length of stay but no significant difference in mortality or rate of ICU transfer. We also observed lower mortality and reduced lengths of stay compared to historical data for alerted patients. 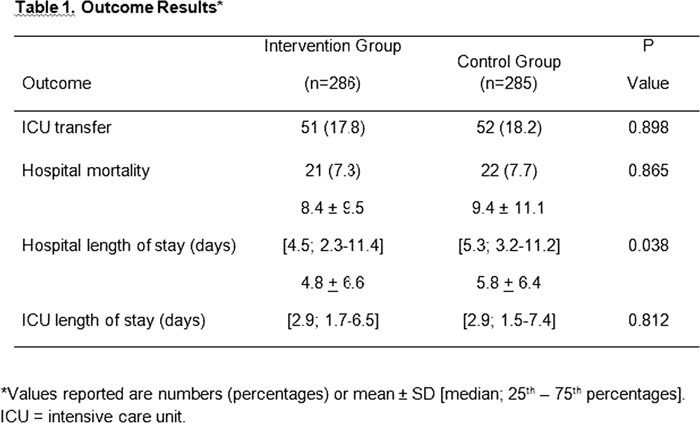