Medication reconciliation (med rec) is an active process, occurring at transition points in care, whereby medications received by the patient prior to the transition are reviewed and considered when developing the next medication regimen. An adverse drug event (ADE) is the harm caused by the use of a drug. Med rec can prevent some ADEs but may be a time‐consuming process. We explored whether a nurse‐phamnacist‐led process could efficiently and inexpensively prevent potential ADEs during admission and discharge in general medicine resident‐covered services in a 1000‐bed urban academic tertiary hospital.

Patients were eligible if they were admitted to 2 of the 4 general medicine services for at least 24 hours and gave consent. Bachelor's‐prepared nurses developed the medication “home” list by interviewing the patient and family, by reviewing medication lists brought by the patient/family or discharge medication lists contained in the electronic medical record, and/or by contacting the patient's primary care physician or local pharmacies. The nurses then compared the “home” list to the patient's active inpatient medications on the provider order‐entry system and judged (with the help of a clinical pharmacist for more complex cases) whether the discrepancies were intentional or potentially unintentional. Prescribers were contacted for potentially unintentional discrepancies. If the prescriber changed the order it was categorized as unintentional. If the order was not changed, the discrepancy was categorized as intentional. This process was repeated at discharge. Two physicians and 2 pharmacists rated the unintentional discrepancies on a 1‐3 potential harm scale (Table 2).

The study data included only the first admission for 563 patients over 15 months. “Home” list information gathering took an average of 29 minutes, Patient characteristics are summarized in Table 1. Eighty‐seven percent of the patients were admitted through the emergency room, and 58% of the patients lived within 5 miles of the hospital. Two hundred and twenty‐five patients (40%) had at least 1 discrepancy on admission or discharge. Of those 225 patients, 162 patients (29%) had a discrepancy ranked 2 or 3 on the harm scale. Although there were fewer total discrepancies at discharge, 74.3% of the discharge discrepancies had the potential to cause harm as compared to only 45.3% of the admission discrepancies. Overall, we potentially prevented 28 ADEs for every 100 patient encounters at a cost of $32 per patient. Logislic regression revealed that the only factor associated with the likelihood of having a discrepancy was the number of medications. 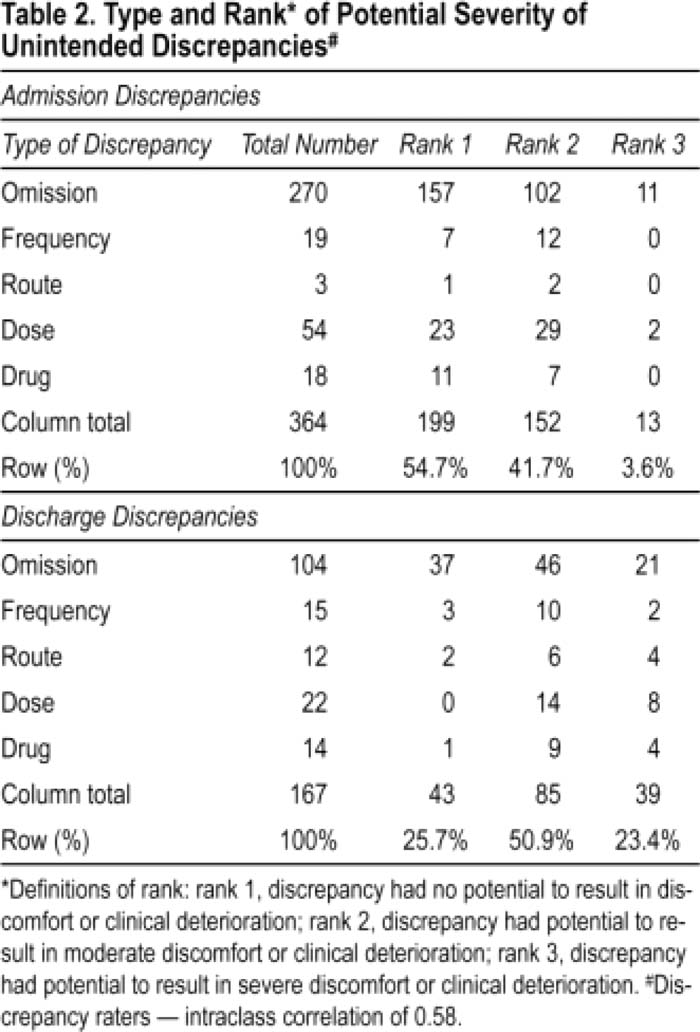 Even with a physician performing med rec, we found many discrepancies that had the potential to cause harm, both on admission and at discharge. Nurse‐pharmacist‐led med rec identified potential harmful discrepancies in 29% of the patients efficiently and at a low overall cost. To decrease costs further, the intervention could target patients with multiple home medications.