A 38-year-old Caucasian male presented to our emergency room (ER) with left-sided abdominal pain that has been progressively worsening for 2 days. He reported that the pain started gradually in the left lower region of his abdomen without radiation. He described the pain as “pressure like feeling”, gradually worsening and was constant in nature. Lying on his left side helped alleviate the pain and no exacerbating factors were reported. He had not attempted any pain medications. He denied any diarrhea, constipation, urinary symptoms, nausea, vomiting or blood in stools. No fever or chills were reported. He denied any trauma or travel history. His past medical history was significant for Acute appendicitis at the age of 30, for which he had a laparoscopic appendectomy done. He denied having any complications during and after the surgery. He had no pertinent family history or similar symptoms in the past. He had no known drug allergies and was not taking any prescribed or over the counter medications. He had a 5 pack-year smoking history and drinks alcohol ocassionally. He never used any recreational drugs.

On physical exam upon presentation, his vital signs were as follows. Blood Pressure 116/74 mmHg , Pulse 78 / minute, Temperature 98.7 °F (37.1 °C) (Oral),  Respiratory rate 16/minute,  BMI 27.41 kg/m2 , Oxygen saturation 97% on room air. He has localized tenderness in left lower quadrant with no guarding or rigidity. Bowel sounds were audible and active. Rest of the physical exam was unremarkable. He was kept nothing per Oral (NPO) and was sent to a emergent Computerized Tomography (CT) scan of the abdomen and pelvis with contrast. A 2 cm, fat density, oval shaped lesion with peripheral enhancement (consistent with hyperemia) and perilesional fat stranding and edema was seen adjacent to the descending colon. These findings were consistent with Epiploic Appendagitis. An incidental 4 mm nodule was also seen in the lung base. Patient was apprehensive that he will require an abdominal surgery. He was reassured and was started on Toradol as needed (PRN) for abdominal pain and treated conservatively. The diet was advanced to general diet the following day. He had significant improvement in the symptoms after receiving the pain medication and was observed in hospital. He had no further complications and expressed complete resolution of the symptoms and was discharged to home the following day. He followed up with us in the clinic for the next 2 years for his follow up chest CT scans for the lung nodule. He did not have any further abdominal symptoms or complications. The lung nodule was stable and patient has quit smoking.

Epiploic appendagitis is an ischemic infarction of an epiploic appendage caused by torsion or spontaneous thrombosis of the central draining vein. The typical patient profile is a young to middle aged male presenting with left flank and lower quadrant pain. Management is conservative with anti-inflammatory medications or short course of opiates. The condition is self-resolving and awareness about this condition can avoid unnecessary surgical interventions. It is very important for physicians to be aware about this entity as it is often miss diagnosed as appendicitis or diverticulitis 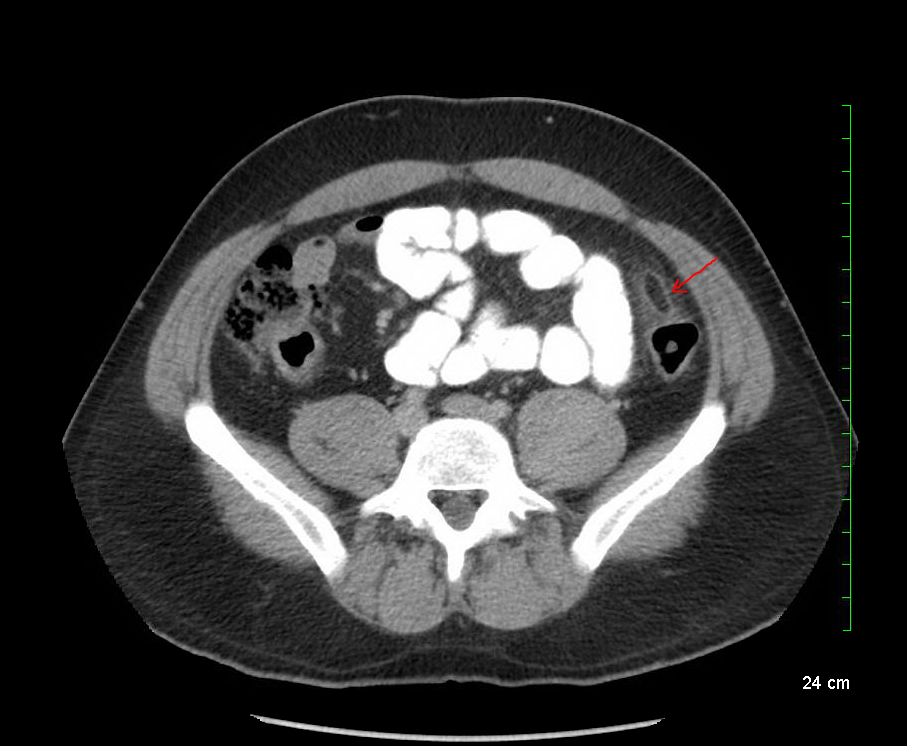