Case Presentation: A 50-year-old African American man with a sixteen year history of skin rash presents with worsening skin lesions and joint pain. The rash is diffuse, scaly, and pruritic, and the joints in all of his extremities are swollen and painful. Three years ago, a limited rheumatologic workup was negative, and he was diagnosed with presumptive seronegative psoriatic arthritis. Patient was lost to follow up and never received treatment. For the past 6 months, he had worsening joint pain and rash as well as bilateral inguinal swelling. He also noted ear, eye, and nasal purulent drainage; bilateral eyelid edema; diffuse hair loss including his eye brows; and 110 pounds of unintentional weight loss in the past year.
Physical exam revealed erythroderma and thickened, lichenified skin with scaly rash covering the entire body; protruding calluses on bilateral heels; diffuse alopecia; bilateral eyelid swelling with ectroprion; and thickened and deformed nails. Non-tender, bilateral inguinal lymph nodes with yellowish drainage were also noted. His CRP was elevated at 13.8 (<1.0 mg/dL). Infectious workup, including sexually transmitted diseases, was negative. X-rays of multiple joints showed mild degenerative changes and erosions. Skin biopsy revealed a CD4+ atypical lymphocytic infiltrate most consistent with cutaneous T-cell lymphoma. Peripheral blood cytology reported the findings of Sézary cells, confirming the diagnosis of Sézary syndrome. Biopsy of inguinal lymph node was negative. Bone marrow biopsy and T-cell receptor gene rearrangements are pending. He was initiated on bexarotene, an oral retinoid-based chemotherapy.

Discussion: Primary cutaneous T-cell lymphoma (CTCL) and psoriasis are related disorders with challenges in diagnosis. Their similar clinical features frequently delay the diagnosis of CTCL. Patients with psoriasis have been reported to have an increased risk for CTCL, especially in African American males. In our patient, his extensive joint involvement and long duration of symptoms support the initial diagnosis of psoriatic arthritis which then led to CTCL.

CTCL is a spectrum of malignancies that includes both indolent and rapidly progressing diseases. Sézary syndrome (SS) is the leukemic form of CTCL that is defined by a triad of erythroderma, lymphadenopathy, and Sézary cells, which are neoplastic T-cells with a characteristic cerebriform nucleus, within the blood, skin, and lymph nodes. Other common manifestations include alopecia, onychodystrophy, palmoplantar hyperkeratosis, and ectropions. The pathogenesis of SS is currently not well understood, though recent literature has implicated genetic alterations. Prognosis of SS is poor. The 5-year survival of 25% and median survival rate of 1-4 years, with most patients dying from opportunistic infections. There is no standardized treatment algorithm exists for SS, but immunomodulating agents such as retinoids and histone-deacetylase inhibitors are first line, with more immunosuppressive therapies reserved for refractory cases.

Conclusions: CTCL can mimic psoriasis, and the aggressive form of CTCL, Sézary syndrome, carries poor outcome. Hence, physicians should consider further work up for malignancy in patients with long standing history of psoriasis presenting with erythroderma and systemic manifestations. 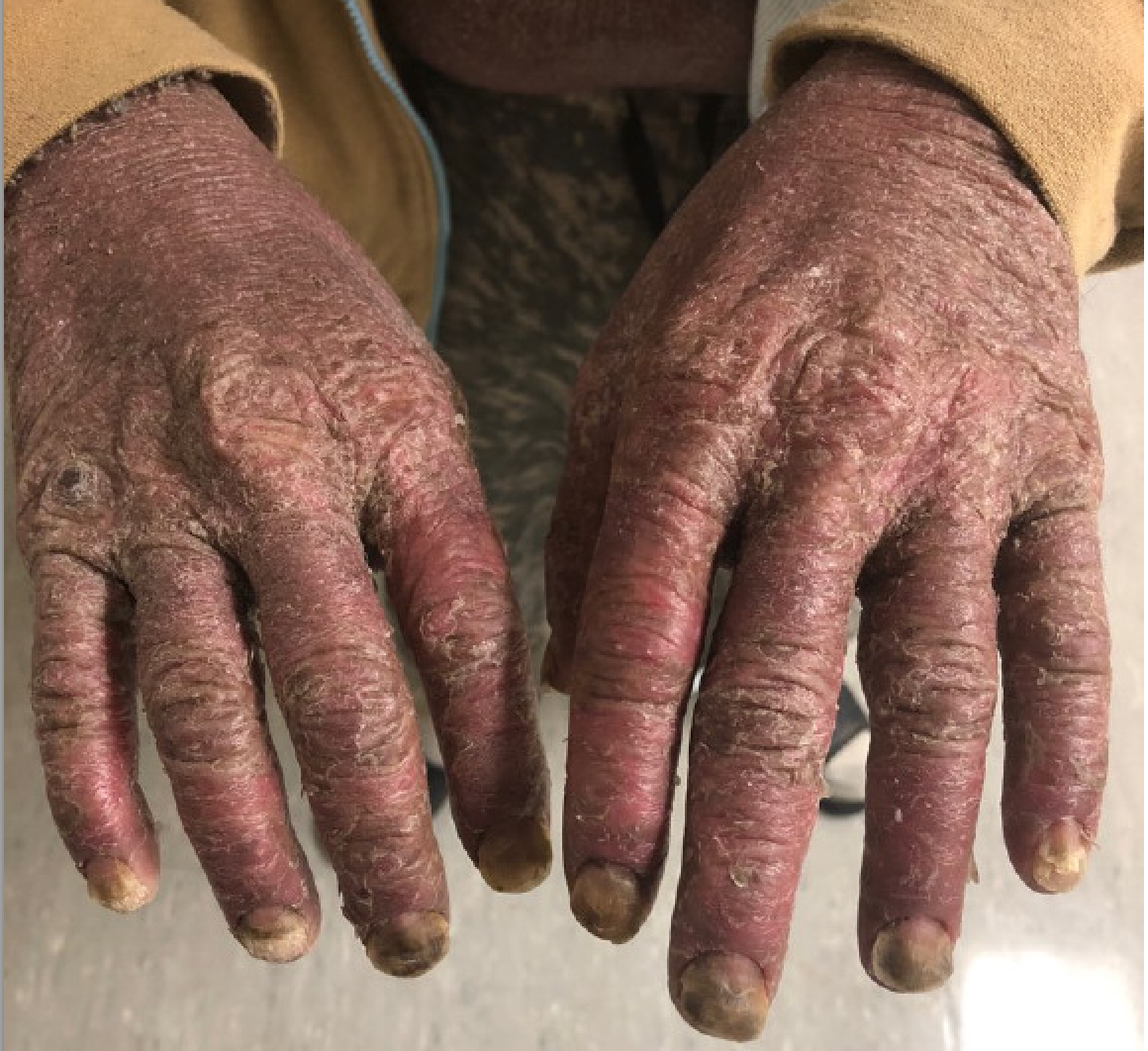 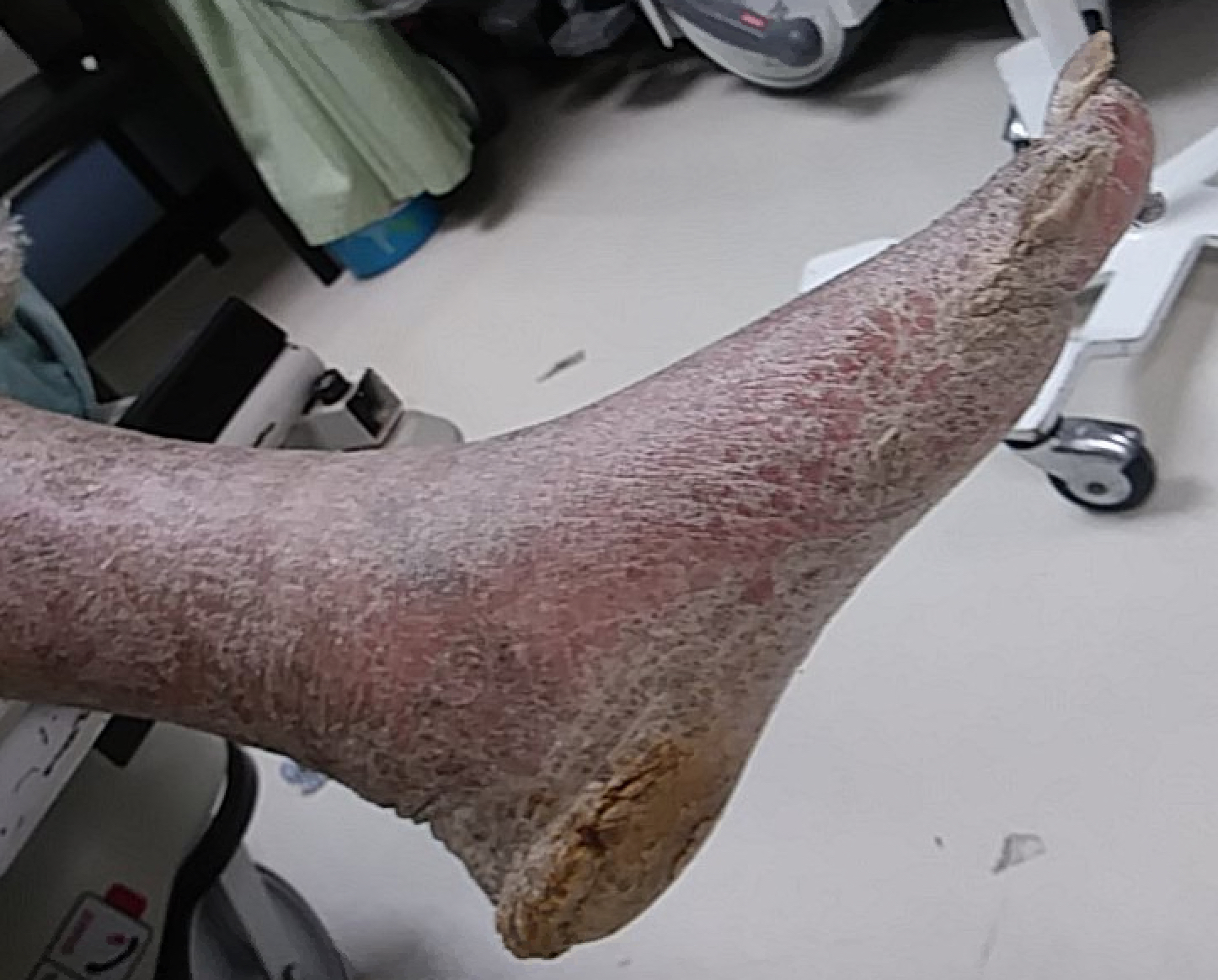