Case Presentation: A 59 year-old black male with a past medical history significant for tobacco and polysubstance abuse presented to our Emergency Department with severe left-sided chest pain and pressure beginning 45 minutes after using cocaine.  He had associated nausea, emesis and dizziness.  He was mildly hypertensive with a blood pressure of 153/56 mmHg.  His electrocardiogram showed sinus bradycardia at 40 beats per minute, with new T-wave inversions in the inferior leads, and V3 through V6.  His had a potassium of 2.8 mmol/L and a creatinine of 1.6 mg/dL.  Creatinine Kinase was elevated at 191 units/L (normal 38-174 units/L).  Serial troponins were negative.  He received morphine and aspirin, with minimal relief.   The patient was admitted to Medicine with a diagnosis of acute cocaine-induced chest pain. On exam, the patient was anxious.  Lungs were clear.  He had no cardiac murmurs, rubs, or gallops.  Peripheral pulses were strong and symmetric.  He had mild abdominal tenderness, most pronounced in the upper quadrants.  No masses or bruits were noted.  A few hours after arriving to the floor, he developed sudden abdominal pain. His blood pressure was 150/80 mmHg. Given the change in symptoms, and failure to respond to therapy, a computed tomography scan of the chest and abdomen was done.  A Stanford Type A dissection, from the ascending aorta to the aortic bifurcation was confirmed; the patient was referred for emergent surgery.

Discussion: Cocaine is one of the most commonly used drugs in the United States.  According to the Drug Abuse Warning Network report in 2009, cocaine was responsible for 422,896 of the nearly 1 million drug associated ER visits.  While cocaine-related cardiovascular events are well-known, cocaine-related aortic dissection is relatively rare.  One study found only 22 documented reports between the years 1986 and 2002.  Dean and colleagues studied 3584 patients in the International Registry of Acute Aortic Dissection from 1996 to 2012 and found 1.8% had documented cocaine abuse. Patients with cocaine-related aortic dissection tend to be younger (as young as 26 years), black, smokers with a history of hypertension presenting within 0 to 24 hours after cocaine use.  They are nearly as likely to have a Type A aortic dissection as a Type B aortic dissection. Those with Type A dissections are more likely to have renal failure, as was seen in our patient. Our patient did not have a significant history of hypertension.:

Conclusions: Clinicians in the inpatient setting, where rapid, accurate diagnosis can make a difference between life and death, should consider aortic dissection in patients presenting with chest pain, cocaine use and a history of tobacco use and/or chronic hypertension. This is especially critical when symptoms persist or worsen despite acute therapy. 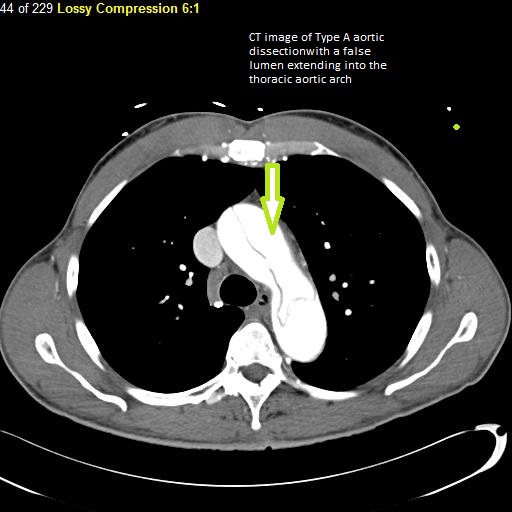