Emergency department (ED) physicians in our hospital commonly use exercise treadmill testing (ETT) to manage low‐risk patients who present with chest pain. Selected patients undergo ETT either on the day of presentation or within days after discharge.

A hospitalist‐run ETT laboratory was opened in the ED to improve the accessibility of ETT to ED physicians.

All 9 participating hospitalists had no previous training in exercise electro‐cardiography. Each performed and interpreted a minimum of 50 tests under the supervision of a cardiologist to fulfill standard training requirements. Hospitalists then staffed the ETT laboratory in 4‐hour shifts on weekday mornings with an electrocardiography technician. Patients from the daily pool of referrals were selected on a first‐come basis; overbooked patients were sent to the full‐time ETT laboratory, which is staffed by cardiologists. After completing a standardized collection form, hospitalists performed ETT using the Bruce protocol. Tests were interpreted as positive, negative, or intermediate; a peak heart rate of less than 85% of a patient's maximal predicted heart rate without positive criteria was an intermediate test. Hospitalists' interpretations were used by referring ED physicians for immediate decision making about patients' dispositions. However, as a quality check of hospi‐talists' interpretations, unblinded cardiologists later reviewed each test interpretation and revised discrepant interpretations in patients' permanent medical records. We reviewed the medical records of patients with discrepant interpretations 6 months after ETT for untoward events. 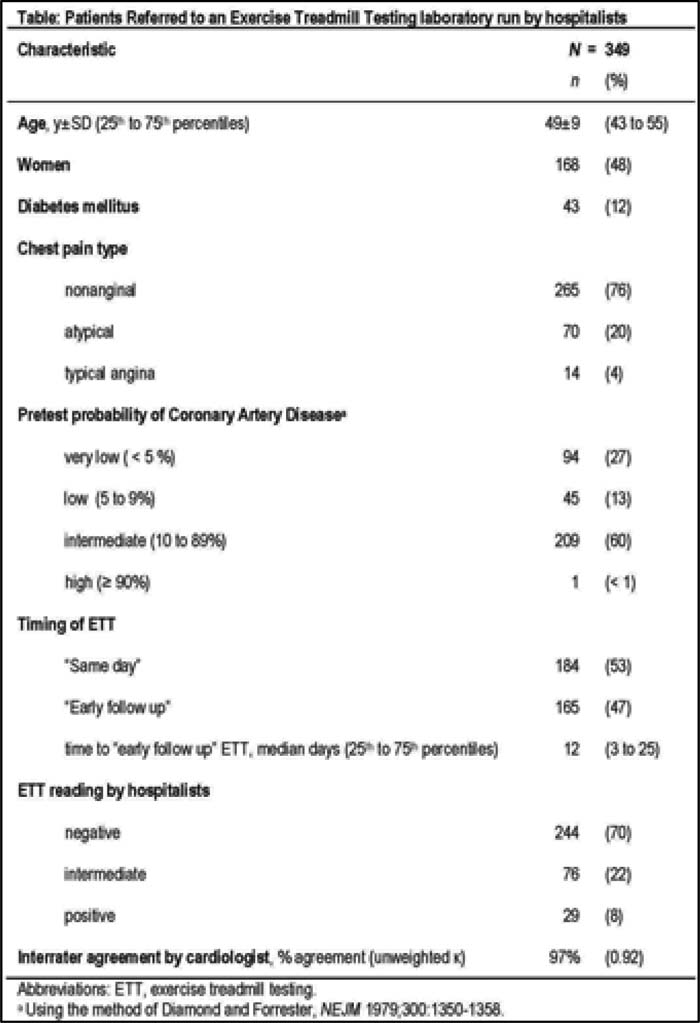 During this 14‐month trial period, ETT was performed on 349 patients with chest pain (Table 1). Half the patients underwent same‐day ETT, a capability that was generally unavailable before the hospitalist‐run laboratory opened. Almost all patients had nonanginal or atypical symptoms, and most had an intermediate pretest probability of coronary artery disease. Interrater agreement between hospitalists and cardiologists was 97% (unweighted 0.92). Among the 13 patients with discrepant interpretations, 3 were interpreted as negative by hospitalists and as positive by cardiologists. No untoward events occurred in patients with discrepant interpretations during follow‐up. Our results suggest that ETT can be performed by hospitalists for low‐risk chest pain without a supervising cardiologist. Because patient adherence to follow‐up ETT after discharge is low, the improved accessibility of same‐day ETT may increase the proportion of referrals that actually receive ETT.