A 59 year old woman with history of breast cancer in remission after chemotherapy and radiation presented with intermittent dizziness, palpitations, and chest pain to the emergency room. She developed ventricular tachycardia with troponin elevated to 4.13. She then developed cardiac arrest, and was revived after 20 minutes of CPR. EKG at this time showed sinus tachycardia and a new RBBB. Subsequent cardiac catheterization revealed clean coronary arteries. An intra‐aortic balloon pump was placed, and she was maintained on several pressors, including epinephrine, norepinerphine, vasopressin, phenylephrine, and milrinone. Her troponin continued to increase to >100. Echocardiogram showed an ejection fraction of 20‐30%, LV enlargement, and severe global LV dysfunction. The working diagnosis of her cardiovascular collapse was myocarditis, but she was not hemodynamically stable to undergo endomyocardial biopsy for confirmation. The team decided to treat her empirically for presumed myocarditis with high dose steroids. At this time, her condition was complicated by ischemia‐induced shock liver, renal failure, upper extremity DVT, and hyperglycemia. She was transferred to an outside hospital for Impella ventricular assist device for mechanical circulatory support, which was removed after 7 days. Her pressors were weaned off, and her cardiac function also improved on repeat echocardiogram demonstrating an ejection fraction of 45%. She then developed sepsis physiology. As part of the infectious work‐up, she underwent a CT abdomen that revealed a 4.8 cm x 4.4 cm left adrenal mass with focal I‐123 MIBG uptake on subsequent scanning. At this point, it was unclear whether this was an incidental finding or the cause of an adrenergic crisis leading to cardiovascular collapse. We measured her 24‐ hour urine metanephrines and found that metanephrines were elevated to 2968 and normetanephrines to 1188. This, along with her nightly headaches were consistent with a functional pheochromocytoma . We started her on phenoxybenzamine and labetalol. She then underwent successful surgical resection of her adrenal tumor, and was discharged from the hospital.

Pheochromocytoma has a rare incidence of 2‐8 cases per million people per year. 11% of these patients will present with acute cardiac complications, with even fewer cases demonstrating catecholamine‐induced cardiomyopathy in the form of Takotsubo cardiomyopathy, inverse Takotsubo cardiomypathy, or global LV dysfunction. Catecholamine‐induced cardiovascular collapse is rarely reported to return to normal cardiac function, and usually only after surgical removal of tumor and alpha‐blockade. This case describes a rare cause of cardiogenic shock from NSTEMI without coronary artery disease, and raises awareness to diagnosing pheochomocytoma‐ induced cardiogenic shock in the acute setting.

Early diagnosis of pheochromocytoma‐induced cardiogenic shock is challenging, but necessary to consider, especially since management would change. The usual therapies of chemical pressor support can actually worsen cardiogenic shock. This incidental discovery of adrenal mass likely saved this patient’s life. 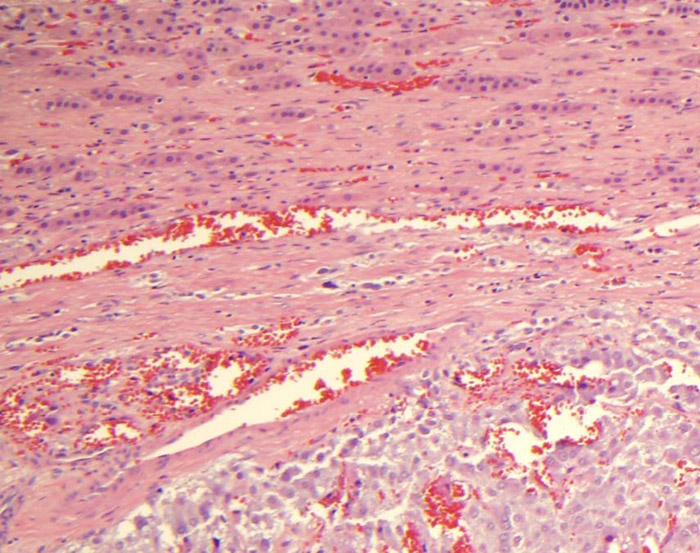