Case Presentation: A 65 year-old Caucasian male presented with complaints of small amounts of hematochezia and constipation.  Colonoscopy showed a large, ulcerated partially obstructing sigmoid mass concerning for cancer 25cm proximal to the anus.  The lesion was unable to be traversed.  Biopsies were obtained and pathology demonstrated only necrotic debris and eosinophilic inflammation.  This relatively benign result was suspicious and thought to be possibly due to superficial biopsies.  The patient was therefore referred to General Surgery for possible resection. Since the area distal to the sigmoid mass could not be characterized, a computed tomography (CT) scan of the chest, abdomen and pelvis was obtained and showed sigmoid wall thickening and an incidental indeterminate 28 mm left adrenal mass.  The patient underwent surgical resection which removed a fungating sigmoid mass with extension into nearby lymph nodes.  Pathology demonstrated abundant eosinophils, numerous necrotizing granulomas with multinucleated giant cells and presence of fungal hyphae consistent with basidiobolomycosis, a saprophytic fungus.  Fungal organisms were also identified in two regional lymph nodes.  He was started on fluconazole status post resection which was later changed to itraconazole and metronidazole.  Due to the adrenal mass on CT and evidence of extension into lymph nodes, the possibility of disseminated fungal infection is currently under workup.

Discussion: Gastrointestinal basidiobolomycosis is a rare entity, although one that is being increasingly recognized as a potential mimicker of gastrointestinal malignancy.  There are less than 100 reported cases.  Basidiobolomycosis is caused by Basidiobolus ranarum, an environmental saprophytic fungal organism belonging to the zygomycete class.  Risk factors include: living in warm, humid tropical and subtropical areas where the fungus is found in reptiles and amphibians, outdoor work environment, a long duration of smoking, which decreases WBC mucosal function, use of ranitidine or PPI’s causing acid suppression allowing fungal organism survival and transit into the lower GI tract, and diabetes.  To the best of our knowledge, our patient did not have any of these risk factors. The fungus often presents as a malignant-appearing mass when involving the gastrointestinal tract.  Colonoscopy should be performed to obtain biopsies, and surgical resection is required to remove the mass.  Treatment with antifungal agents should include susceptibility testing since Basidiobolomycosis antifungal response is known to be highly variable and isolate-dependent.  Pre-operative and prolonged post-surgical treatment itraconazole for at least 6 months appears to have the greatest success, with low rates of fungal resistance.  Follow-up imaging with magnetic resonance imaging or CT should also be done to monitor for any recurrence or dissemination.

Conclusions: Colonic gastrointestinal basidiobolomycosis should be considered in the differential of any patient with hematochezia, bowel habit changes and abdominal symptoms including but not limited to bloating, cramping and abdominal discomfort.  It is important to be aware especially since Basidiobolomycosis, although serious, is ultimately a curable condition. 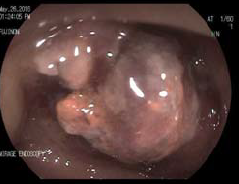