Background: Adverse drug events (ADEs) are responsible for up to 770,000 inpatient injuries and deaths annually in the United States, most of which are from prescribing errors. Electronic order sets are designed to improve quality by reducing care variability and increasing efficiency of order entry, but may also facilitate prescribing errors via automation bias. There has not been a well described systematic approach to identifying and acting on these errors, which are typically captured on an ad hoc basis. We describe a data mining approach using EHR audit trail data to systemically capture near misses in medication ordering associated with order sets.

Methods: Data was mined from all inpatient medications ordered within order sets at our institution from 2008 to 2013. We chose to include in our analysis only order sets used more than 5000 times and medications ordered more than 100 times per order set over the five year period. A medication order near miss was defined as a medication that was discontinued within 10 minutes of being ordered, which has been described in literature. Near miss rates and relative risks of medication orders being near misses if associated with order sets were calculated for all medication-order set pairs. T-tests and chi-squared tests were used to test for significance.

Conclusions: We describe a data driven method for detecting and characterizing medication order near misses associated with order sets. The near miss relative risk distribution suggests that while most orders are less likely to result in near misses when ordered from an order set, there is a subset of “high risk” orders and order sets that may be candidates for further evaluation. In the inpatient medicine admissions order set, we identified the top five medication orders that had the highest relative risk of near misses. Among these orders, intravenous hydromorphone and subcutaneous enoxaparin stand out as medications that could potentially result in serious ADEs. These data driven insights may enhance the order set review process beyond conventional methods that rely on ad hoc error reporting. 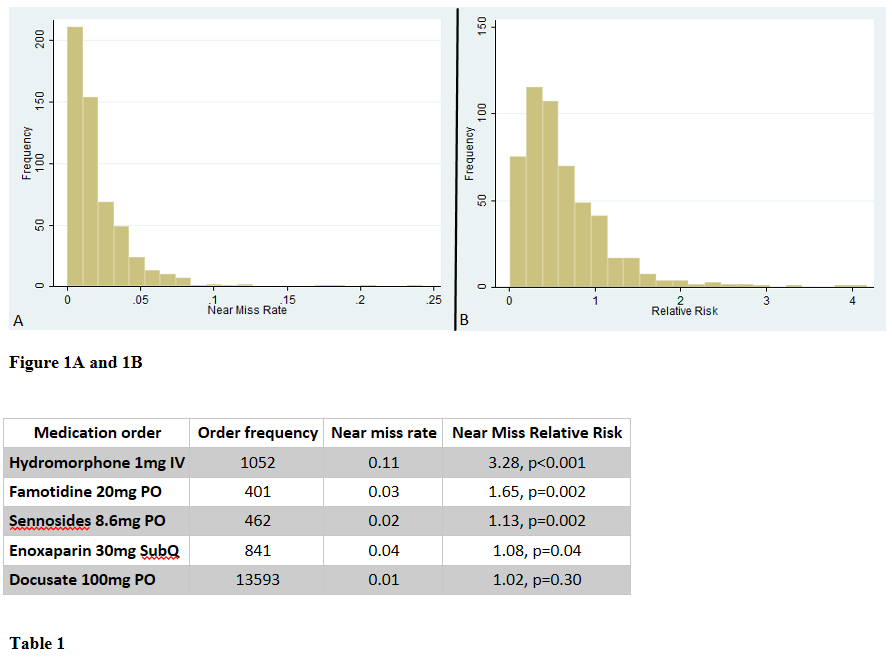