Case Presentation:
We present a 47 year-old male who experienced chest discomfort and a syncopal episode.  He was found to be in ventricular tachycardia and was immediately electrocardioverted.  Afterwards his symptoms resolved and he was in sinus tachycardia, however his electrocardiogram (EKG) showed ST elevation in the anterolateral leads, along with T-wave inversions in the lateral leads.  Cardiac biomarkers were elevated and a diagnosis of ST-elevation MI (STEMI) was made.

The patient urgently underwent cardiac catheterization, where a 100% left anterior descending (LAD) artery occlusion was discovered that was not amenable to stenting or angioplasty.   A dipyridamole scan was then done to assess myocardial perfusion, which surprisingly did not show any significant area of ischemia.  This raised the question of whether this patient with chest pain, ST elevation, increased cardiac biomarkers and an LAD occlusion truly had an acute myocardial infarction.

Further history was elicited and the patient recalled severe chest pain three months prior to this event.  A transthoracic echocardiogram was also obtained, which again surprised the clinical team with the finding of a left ventricular aneurysm.  The aneurysm proved pertinent, as anterior ST elevations on EKG has been demonstrated with left ventricular (LV) aneurysms.

This also created a clinical quandary.  Was this an acute MI with subsequent associated ventricular tachycardia?  Or was this instead the result of an undiagnosed remote infarction, leading to an LV aneurysm and months later his presenting symptoms of ventricular tachycardia, syncope and chest discomfort?  The first scenario would prompt surgical revascularization, whereas the latter would lead the clinician towards medical management and immediate implantable cardioverter-defibrillator (ICD) implantation.

To differentiate, a clever clinical strategy was initially employed.  ST elevation in the setting of LV aneurysm has at times been shown to be provoked by tachycardia and reversible.  Therefore using beta blocker therapy the patients’ heart rate was slowed to a normal rate, at which time his ST elevations resolved, supporting the diagnosis of a remote infarction.  Had this been an acute infarction, rate control would not have corrected this concerning EKG finding.

To confirm this diagnosis a cardiac MRI was later obtained, which showed thinning of the myocardium consistent with a remote infarction.  However well beforehand, clinical reasoning and EKG interpretation were able to lead to accurate decision making and spare the patient unnecessary cardiothoracic surgery.

Discussion:
This case shows how tachycardia in the setting of a left ventricular aneurysm can masquerade a STEMI, and can be even more difficult to differentiate with associated arrhythmia.  Obtaining a thorough history, applying thorough clinical reasoning, and utilizing available imaging modalities are critical to achieving the correct diagnosis.

Conclusions:
In addition to patients with acute infarction, anterior ST segment elevation can also arise from elevated heart rate in the setting of a left ventricular aneurysm.  Differentiating between the two etiologies is critical in determining management, by guiding patients either towards urgent revascularization or immediate ICD implantation.  By slowing the ventricular rate and repeating EKG imaging, a clinician can potentially identify reversible ST-elevations not due to acute infarction without expensive or invasive testing. 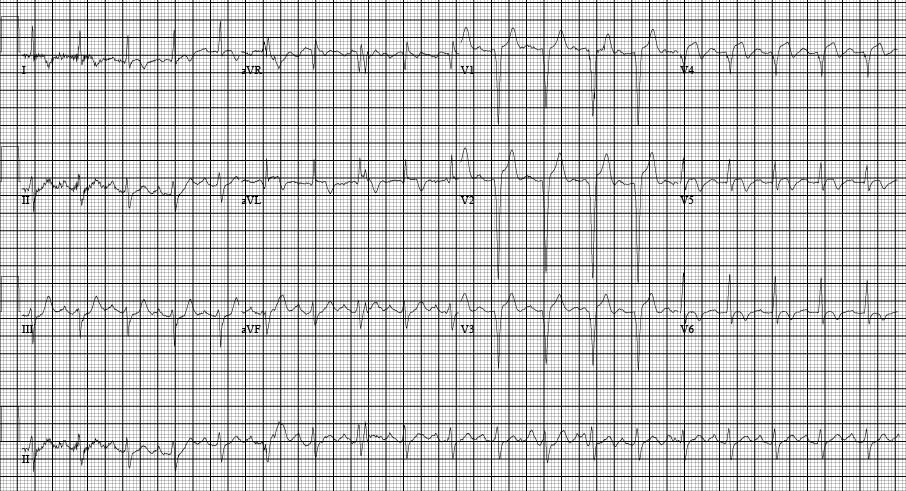