A 41‐year‐old white woman with history of peripheral vascular disease presented with a syncopal episode and leg pain. She reported bilateral lower‐extremity pain for the past 5 days. Because of a history of multiple deep vein thromboses, she was on lifelong Coumadin therapy. The patient decided to stop taking Coumadin 3 weeks prior. Pulmonary embolism was considered, but CT chest was negative. Imaging revealed an aortic thrombus and emboli to the left kidney. The thrombus was 2.7 cm in length and 0.8 cm in diameter. It was on the ventral portion of the thoracic aorta at the level of the carina. Ultrasound of left lower‐extremity arteries revealed significant ischemia. The patient's hypercoagulable labs were normal, except for low protein C. In addition, the patient did not have features of atherosclerosis on CT. Her lipid profile was normal. The patient denied long travel or chronic inactivity. She admitted to recent use of tobacco, alcohol, and cocaine. Vascular surgery was consulted and decided on therapeutic Lovenox as a bridge to Coumadin instead of surgical intervention.

Thrombus formation in the thoracic aorta is an uncommon event in middle‐aged patients without atherosclerosis. The aorta is a large‐caliber vessel with significant blood flow, making it less likely to form a thrombus. Formation of thrombus in the thoracic aorta is of interest when the patient manifests peripheral artery disease and emboli in various organs. Explanations for thrombus formation in young women include malignancy, oral birth control, and disorders with factors involved in clotting. Another consideration is dysfunction of the vascular wall itself. We report a case of thoracic aorta thrombus in a patient with few risk factors.

Most cases of thoracic aorta thrombus involve aneurysm or atherosclerosis. It is rare when thrombus forms on a normal aorta. Aortic thrombus is gaining attention as a source for embolic disease. Current literature indicates roughly 85% of peripheral artery embolisms have their origin in the heart. Only 5% have been documented as originating in the aorta. Of that 5%, only a small proportion originate in the thoracic aorta. There is no true consensus concerning treatment. Although many advocate surgery, there is also strong support for anticoagulation. Another dilemma in medical management is understanding the pathophysiology of this condition. Most aortic thrombi occur in elderly patients with significant atherosclerotic disease or multiple risk factors. Our patient was only 41 with no indications of atherosclerosis. Her risk factors were tobacco and cocaine use. We believe her protein C level was low because of her previous use of Coumadin. Perhaps the patient's recent use of cocaine may have contributed to her hypercoagulable state. Regardless of etiology, this case exemplifies the need to consider the thoracic aorta as a source for embolism, even in patients with few cardiac risk factors. 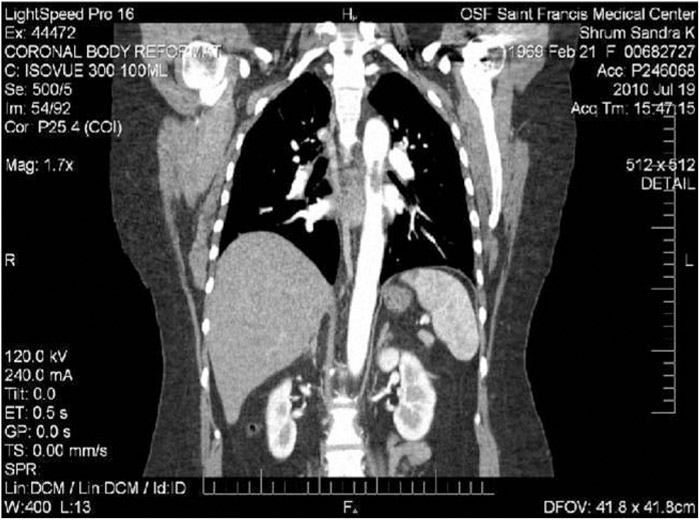 Thoracic aorta thrombus 2.7 cm in length and 0. 8 cm in diameter at the level of the carina. 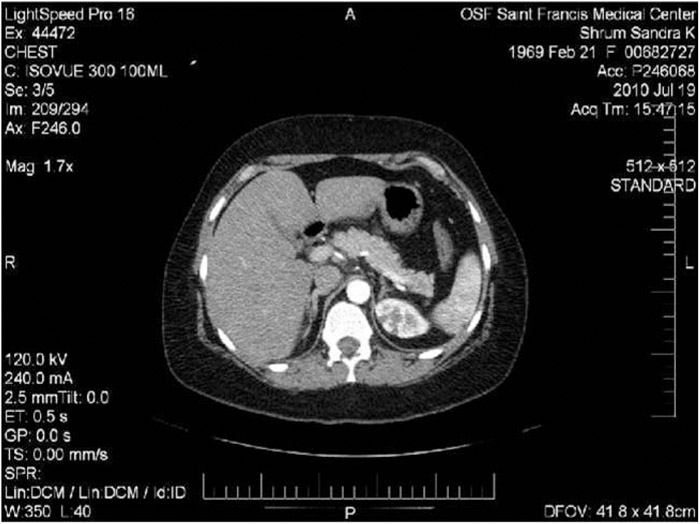 Two cortical infarcts from emboli in the posterior aspect of the upper pole of left kidney.