A 24 year-old male presented with rash and fever for one month. He was recently diagnosed with bipolar disorder and started on fluphenazine, lithium, and benztropine. Four weeks after starting these medications he developed a diffuse pruritic rash, intermittent fevers, confusion and lethargy.

On evaluation the patient was febrile and tachycardic, with a diffuse morbilliform rash on his trunk and extremities, and axillary lymphadenopathy. Labs were notable for leukocytosis to 20.5 x103/ug with 35% eosinophils, elevated AST and ALT, INR, creatinine, and troponin. The electrocardiogram was normal. Initial transthoracic echocardiography was notable for borderline systolic function and a small pericardial effusion. Skin biopsy confirmed diagnosis of drug rash with eosinophilia and systemic symptoms (DRESS) and patient was started on oral prednisone 1mg/kg. Two days later, cardiac MRI revealed bi-ventricular global systolic dysfunction with left ventricular ejection fraction of 22%, diffusely increased T2-weighted signal in the ventricular walls, and a small focus of late-gadolinium enhancement in the interventricular septum, consistent with myocarditis. He was given intravenous methylprednisolone and IVIG infusion for three days, after which he was continued on oral prednisone. His clinical condition improved and TTE one week later revealed normalization of right ventricular function and improvement of EF to 35%.

Myocarditis is an under-appreciated manifestation of DRESS with only 22 case reports in the literature. In the initial stages, patients frequently lack cardiac symptoms though may have non-specific ECG changes and thickening of the ventricle walls seen on TTE. Acute necrotizing eosinophilic myocarditis is the most severe form and can be rapidly fatal. These patients present with acute heart failure, and usually have ECG changes and cardiac biomarkers that mimic acute infarction.

Corticosteroids are the mainstay of treatment, though IVIG, mycophenolate, and cyclosporine have also been used. If medical treatment is delayed, patients may develop mural thrombi and fibrosis of the endomyocardium.  Cardiac MRI has been shown to be 100% sensitive and 90% specific for myocarditis and is a useful and noninvasive means of making the diagnosis.

DRESS myocarditis is a serious illness that should be recognized and treated quickly as it can be fatal. The mainstays of treatment are removal of the offending medication and immune suppression. Hospitalists must be aware of this potentially fatal syndrome given the frequency of drug reactions and the importance of early intervention. 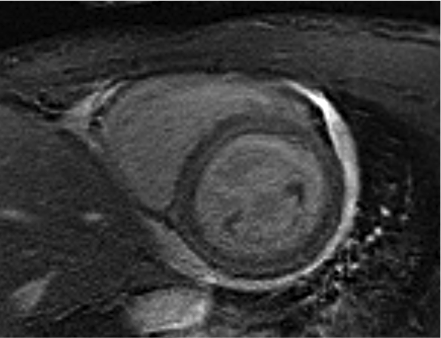