Case Presentation: A 19-year-old female with no significant past medical history presented to the hospital with abdominal pain, fevers and diarrhea after returning from Europe the day prior. Stool studies were positive for campylobacter jejuni. She was hospitalized for three days during which she received approximately 5 liters of IV fluids and was treated with Ciprofloxacin and Flagyl. Patient had mild pulmonary edema on CXR at the time of discharge, which was attributed to excess IV fluids. However, two days after discharge, she returned to the hospital with chest pain and worsening exertional dyspnea. Her diarrhea had mostly resolved and she denied hemoptysis, arthralgia, neurological or urinary symptoms. Her vitals were notable for sinus tachycardia to 114, tachypnea to 36, oxygen saturation was 88% on room air and 94% on 2L nasal canula oxygen. Physical exam was notable for diminished breath sounds at the bilateral lung bases and trace edema in bilateral lower extremities. EKG showed sinus tachycardia without ST segment changes. Chest x-ray showed central vascular congestion and extensive bibasilar consolidation. CT pulmonary angiogram was negative for pulmonary embolism but noted mild cardiomegaly, small bilateral pleural effusions and severe extensive ground-glass and consolidative opacities at bilateral bases. Labs were notable for troponin I of 2.29 ng/ml, WBC mildly elevated at 10.4 x 10*9/L, CRP elevated at 62.2mg/L and ESR elevated at 120mm/hr. Respiratory viral panel was negative. Transthoracic echocardiogram showed no significant abnormalities and normal LVEF. She underwent diuresis with clinical improvement and repeat chest x-ray two days later was clear. Her CRP and troponin both downtrended. Cardiac MRI showed normal LVEF and patchy areas of abnormal T2 weighted signal consistent with myocarditis (Fig 1).

Conclusions: Campylobacter gastroenteritis accounts for 5-7% of all gastroenteritis infections worldwide with about 2 million cases a year. The few documented cases of campylobacter’s association with acute myocarditis have mostly been in young and otherwise healthy people; there is likely an under diagnosis of the association in the older population and those with cardiac dysfunction because their presentation can mimic heart failure exacerbation in the setting of volume overload. Correctly diagnosing acute myocarditis can help fluid status management and reduce morbidity associated with campylobacter gastroenteritis. 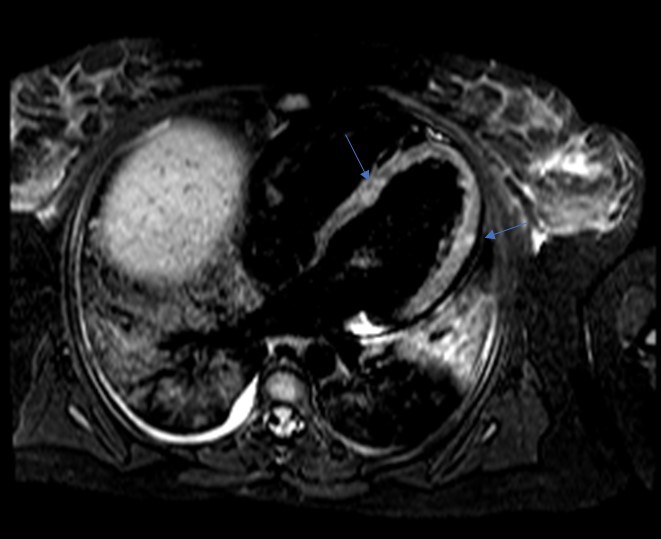