The evolving political and regulatory climes in recent times pose several challenges to hospital medicine. There is a need for a “consumer‐driven” approach to health care that emphasizes both quality of care and consumer satisfaction (Richardson et al., 2001). Several studies have demonstrated better clinical outcomes with a patient‐centered model, including decreased length of stay (LOS), ER visits, and readmissions and higher patient retention rates. In these studies, multidisciplinary teams (MDTs) focus on improved communication with patients, actively involving families/ patients in decision making, and conflict resolution.

As part of a Six‐Sigma initiative, Virtua Memorial Hospital in New Jersey launched a care coordination (CC) model of geographic rounding that was initiated in February 2010. The pilot was initially deployed on the infectious disease (ID) unit that had a high level of patient/staff dissatisfaction. MDTs consisting of an APN, RNs, physical therapist, case manager, social worker, and pharmacist were led by a dedicated hospitalist who facilitated daily rounds 5 days a week. Patients and families received educational brochures and were encouraged to be a part of daily rounds. Initial goals were a 5% decline in the LOS and 5% improvement in staff and patient satisfaction. Patient satisfaction was measured using Press Ganey surveys. Long‐term goals include decreased readmission rates and improved patient outcomes.

In the first quarter after initiation, LOS declined significantly in all payer groups on the ID unit, and patient satisfaction scores improved. The model was then initiated on the mixed oncology and renal units, and data were collected both pre‐CC and post‐CC. In an analysis of more than 3400 patients, the LOS declined across all units post‐CC (Fig. 1). Simultaneously, patient satisfaction scores improved significantly in all 8 independent parameters by PG surveys post CC (Table 1). The results were significantly better in units with low pre‐CC scores. Preliminary results also show a decline in the 30‐day readmission rate for the hospi‐talist group from 19.6% pre‐CC to 17.8% post‐CC. Seventy‐two percent of MDT physicians strongly agreed that this model is beneficial to patient care in the post‐CC survey 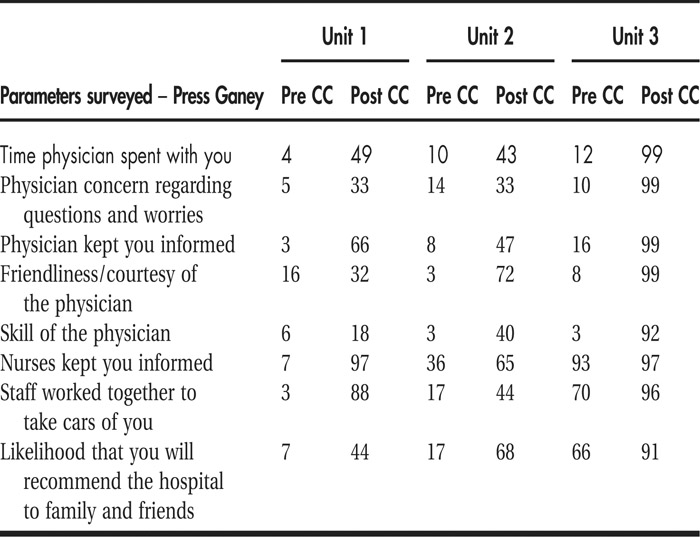 In today's scenario with sensitivity to reimbursements and staffing ratios, the intrinsic value of the CC model lies in its ability to utilize existing resources to deliver consistent, high‐quality, patient‐centered care that is efficient and accountable.