An 82‐year‐old man presented with recurrent episodes of severe hypoglycemia requiring frequent hospitalizations at an outside facility. He was first diagnosed with hypoglycemia 4 months ago when found unconscious by his wife. These episodes occurred on average twice weekly, with blood glucose values often in the 20 mg/dL range. Following an extensive endocrine workup at the outside facility, he was given hydrocortisone for suspected adrenal insufficiency. He also reported gradually increasing shortness of breath with exertion for a few months. He had no history of diabetes mellitus and denied exposure to antidiabetic drugs. Vital signs revealed no orthostatic change. No focal deficits were noted on neurologic examination, although his mood was irritable. Breath sounds were decreased over the left posterior chest. Laboratory tests showed a hemoglobin level of 12.4 g/L, sodium 143 mmol/L, potassium 3.8 mmol/L, creatinine 0.4 mg/dL, and glucose 63 mg/dL. Liver and pancreatic enzymes were normal. A chest x‐ray showed an elevated left hemidi‐aphragm (Fig. 1), and a chest CT showed a large mass in the left hemithorax (Fig. 2). The serum insulin, C‐peptide, proinsulin, insulin‐like growth factor (IGF)–1 and growth hormone levels were suppressed. The serum AM cortisol was normal, and insulin antibodies were absent. He was treated with a continuous 10% dextrose intravenous infusion and later transitioned to oral dexamethasone with adequate glycemic control. A paraneoplastic IGF‐2‐mediated phenomenon was suspected. After a core needle biopsy, en bloc surgical resection of the pleural mass confirmed a 25‐cm solitary fibrous tumor. Following tumor removal, he had no further hypoglycemic episodes and the serum IGF‐2 level decreased from 1569 to 478 ng/mL. 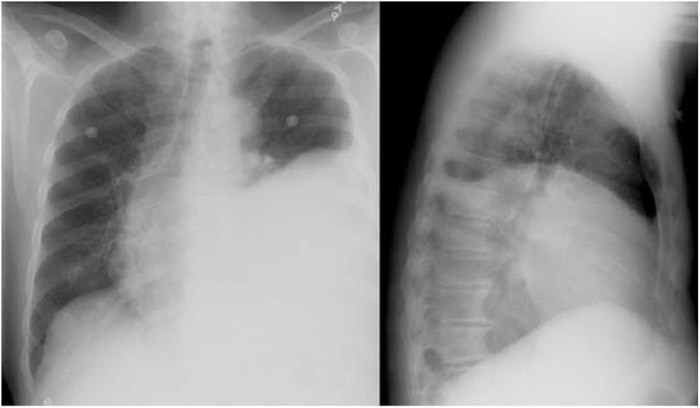 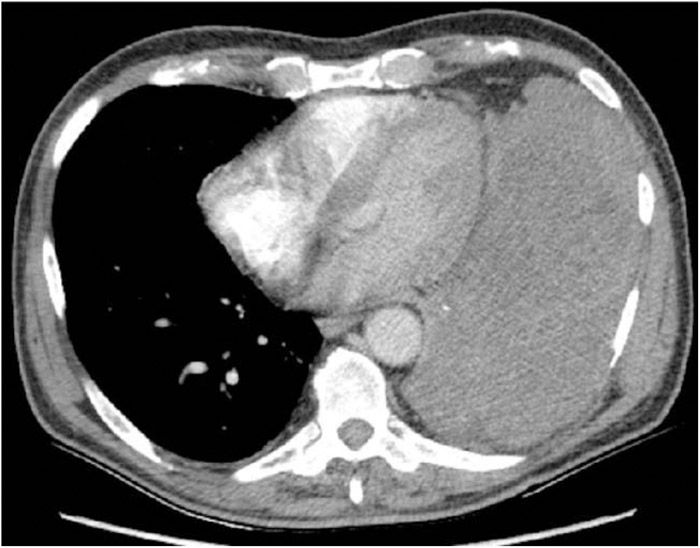 Solitary fibrous tumors of the pleura (SFTP) are rare, mostly benign tumors with only 800 cases reported in the literature. Cases are often asymptomatic or have pulmonary symptoms. Hypoglycemia occurs in 2%–4% of cases (Doege‐Potter syndrome) and is believed to be secondary to the excessive production of IGF‐2 or high‐molecular‐weight IGF‐2 from the increased expression of the pro‐IGF‐2 gene within the tumor cells. IGF‐2 binds to insulin receptors and reduces hepatic gluconeogenesis, causing hypoglycemia. Complete surgical resection of SFTP is usually curative.

Hypoglycemia is a common metabolic disorder in diabetic patients. Recurrent and unexplained hypoglycemia, especially in nondiabetics, should prompt an evaluation for an insulinoma or a non–islet cell tumor such as SFTP. Although surgical resection usually offers a cure, gluco‐corticoids are useful alternatives in this battle for glucose in nonsurgical candidates.