A 6‐year‐old girl presented to an outside ED with 2 days of fever (Tmax 104°F) and vomiting. She had recently returned from a 2‐year stay in Sierra Leone 2 weeks prior to admission. Physical exam was unremarkable. Laboratory studies were significant for mild anemia and mildly elevated LFTs. A blood smear revealed Plasmodium falciparum ring forms. A parasitemia of 23% was initially reported, and the patient was transferred to our PICU, where she was started on a quinidine drip and IV clindamycin. The original blood smear was reviewed by the laboratory, and the initial parasitemia was corrected to 11%. On the third day, the patient's mental status deteriorated to being unresponsive to commands, with an estimated GCS of 9–10. An MRI was obtained and was normal. It was suspected that the patient had developed cerebral malaria. By the next day her mental status improved, and by the fifth day her blood smears were negative for parasites, and she was afebrile and was switched to PO meds. She completed 7 days of antimalarial therapy, and her mental status was back to baseline on discharge. 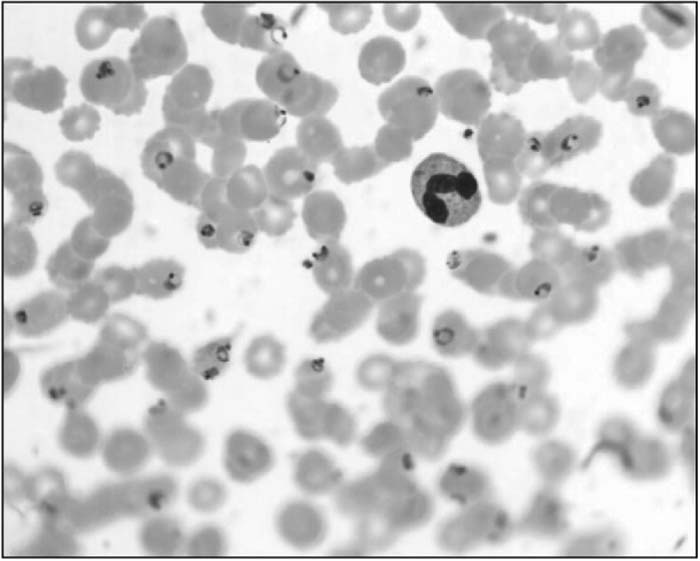 Delicate early trophozoites rings inside of RBC in a child with cerebral malaria.

Cerebral malaria is a leading cause of death from malaria. It causes 15% mortality in children, and 1 in 4 survivors has residual neurological deficits. It is strictly defined as a patient with confirmed malaria having a GCS score < 8; however, any patient who develops altered mental status should be treated as if they have cerebral malaria. Etiology is obstruction of the microcirculation by parasite‐containing RBCs. Other things can cause altered mental status and should be ruled out (hypoglycemia, acidosis, severe anemia, and seizures). In addition, the WHO recommends performing an LP to rule out meningitis. Cerebral malaria has a characteristic retinopathy (patchy whitening of macula and optic fundus), and retinal hemorrhages are frequently seen. Imaging studies of the brain (CT, MRI) should be normal, and EEG should show nonspecific abnormalities. Parasitemia > 5% requires treatment with par‐enteral quinidine, which should be administered in an ICU setting as it is cardiotoxic. Quinidine should be combined with doxycycline or tetracycline, or clindamycin if the patient is less than 8 years of age. Artesunate is now available from the CDC and is recommended by WHO in preference to quinidine because of its safer side‐effect profile.

Though malaria is rare in the United States, its diagnosis should be considered when a patient presents with fever after traveling to an endemic area. One must be able to recognize severe malaria in order to initiate prompt and appropriate treatment. An experienced laboratory staff is crucial in both identifying the Plasmodium species, which dictates therapy, and in accurately estimating the parasitemia