On average, patients took 33.9 days (33.6‐34.1) to respond. Only 11.3% of readmitted patients returned the survey prior to readmission. These patients had no significant decreased satisfaction relative to the non‐readmitted group on any survey questions. Patients that returned survey after readmission, when compared to those not readmitted, were significantly dissatisfied with physician communication, pain control, hospital environment, phlebotomy staff and meals. While they felt satisfied with information about how to seek help after discharge, they remained dissatisfied with the discharge process. However, there was no difference in overall satisfaction between the groups (Tables 1 and 2).

Amongst patients who are readmitted, the vast majority return the survey after readmission and their opinion likely incorporates their feelings about unplanned readmission. These patients appear to be dissatisfied with physician communication and with the discharge process, but also are dissatisfied with a variety of other factors that are less directly related to readmission. The observation that patients who were readmitted prior to turning in the survey had similar ratings as those who were readmitted after to turning in the survey offers reassurance that survey responses are not unduly influenced by an intervening rehospitalization. 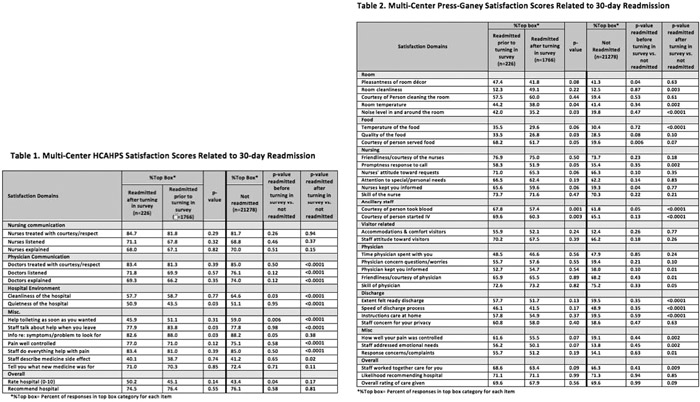